"When you come, bring the cloak that I left with Carpus at Troas, also the books, and above all the parchments." - (2 Timothy 4:13)

The Price of Peace: Money, Democracy, and the Life of John Maynard Keynes

A Question of Power: Electricity and the Wealth of Nations

Logos is offering 30% off Logos 8 Upgrades:

The RZIM Academy is an online training curriculum designed to help individuals become better equipped in Christian thinking and reasoning.

Black History Month and the Early African Influence on Christianity

The Contemporary Conflation of Slavery in the Bible

The Unseen Realm: Recovering the Supernatural Worldview of the Bible

Separation of Church and State

"... as everyone with even a modicum of understanding of the Constitution knows, the term “separation of church and state” appears nowhere in the Constitution. Even Mr. Coons acknowledged as much. The metaphor of a “wall of separation” comes from a letter President Thomas Jefferson penned to a group of Baptists in Danbury, Connecticut—a dozen years after the Constitution and Bill of Rights were ratified. The phrase is not mentioned in the Constitution’s text or in any of the debates leading to its ratification."

"The jurisdictional separation of church and state effected by the First Amendment allows people to vote for religious reasons, to make religious arguments in order to persuade others to support particular candidates or policies, and allows political officials and legislators to act for religious reasons. Nothing in the jurisdictional separation of church and state entails or encourages the separation of religion and politics, much less of religion and public life." 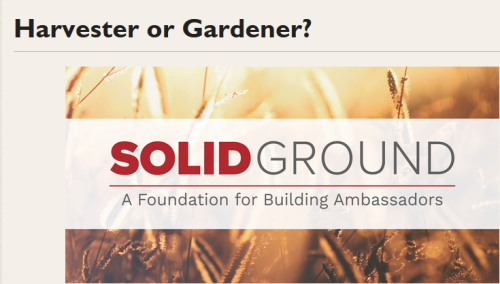 I have a confession to make. I haven’t led anyone to Christ in over 30 years. I know that sounds unbelievable, bizarre—even borderline lame—but from one perspective, it makes perfect sense.

I want to tell you why I’ve been, by one measure, such a spiritual loser. I also want to show you how what I have to say may radically improve your effectiveness as a voice for the gospel.

First, though, the backstory.

Think on these things

“The man of action has the present, but the thinker controls the future.” – Oliver Wendell Holmes Jr.

I begin with the sober ending from Roger Kimball’s, Raymond Aron & the power of ideas (The New Criterion). Mr. Kimball ends with a lengthy quotation from an essay by Irving Kristol called “On Capitalism and the Democratic Idea” (1973): “For two centuries, the very important people who managed the affairs of this society could not believe in the importance of ideas—until one day they were shocked to discover that their children, having been captured and shaped by certain ideas, were either rebelling against their authority or seceding from their society. The truth is that ideas are all-important.”

Kristol continues, “The massive and seemingly solid institutions of any society—the economic institutions, the political institutions, the religious institutions—are always at the mercy of the ideas in the heads of the people who populate these institutions. The leverage of ideas is so immense that a slight change in the intellectual climate can and will—perhaps slowly but nevertheless inexorably—twist a familiar institution into an unrecognizable shape.” As we approach this essay’s fiftieth anniversary, it is a pity that many important people still dismiss the importance of ideas.

Another ending is instructive here. In the excellent Oliver Wendell Holmes: A Life in War, Law, and Ideas Stephen Budiansky ends thus, “In another speech at Harvard, which Holmes delivered on “The Profession of the Law” in 1886, he had spoken of the loneliness of original work, the “black gulf of solitude more isolating than that which surrounds the dying man,” but whose reward is “the secret isolated joy of the thinker, who knows that, a hundred years after he is dead and forgotten, men who never heard of him will be moving to the measure of his thought.” This timely reminder from a dead but never forgotten man (for we still move to the measure of his thoughts) suggests that, to dismiss the importance of ideas, is to invite disaster.

All “practical” issues of life involve philosophy, how we answer the big questions, the chief one being: What does it mean to be human? But, important as our individual answers may be, it is our collective answer to this (and other questions) that affects everything from wait times in the A&E to the price we pay for goods and services. It may be tempting to think that there are a mind-boggling number of worldviews (and slump into the asinine:  “True for you but not true for me”). But, at bottom, there are two. Beneath the multitude of options, we ultimately chose between two schools of thought: “Did God say?” (Genesis 3) and “For what does the scripture say?”  (Romans 4:3); or, as Christ put it, “It is written” (Luke 4:4,8).

The first is an opiate for the people, the latter is, according to Marx, “the opium of the people.” The Opium of the Intellectuals says Kimball, is a title that “is an inversion of Marx’s contemptuous [aforementioned] remark.” Another opiate is naturalism. In the twentieth anniversary issue of Philosophia Christi, Angus Menuge says naturalism is “the most insidious and pervasive [worldview] in the academy.” (And what is pervasive in Academe eventually trickles, nay gushes, into the wider society.) But he also points out that “naturalism cannot present itself as the rational, “scientific” worldview because it discredits the reliability of reason.”

As Kimball notes, “Enlightened thinking [never mind how pompous it sounds] tends to be superficial thinking because its critical armory is deployed against every faith except its faith in the power of reason.” Variations of this argument against naturalism have appeared in Philosophia Christi over the years, all building on the basic idea presented by C.S. Lewis in Miracles: “All possible knowledge, then, depends on the validity of reasoning. […] ‘If my mental processes are determined wholly by the motions of atoms in my brain, I have no reason to suppose that my beliefs are true … and hence I have no reason for supposing my brain to be composed of atoms.’”

And therein lies the rub. The default setting of this world (especially the Sophisticates), “leaves no room for the acts of knowing or insight on which the whole value of our thinking, as a means to truth, depends.” So that, and in keeping with our two main schools of thought, the culture (with devastating consequences) parrots the question that snake Pilate posed in John 18:38, “What is truth”? Once Truth (capital ‘T’) is abandoned then refutation is no longer an option (and so, the next event in John's narrative is the Crucifixion). To dismiss Truth is to crucify Christ. No more cryptic parables, God speaks clearly.

Once Truth is crucified we need an intellectual detox, an epistemic humbling of epic proportions is now in order. So that, until we acknowledge reason has been permanently tarnished by the Fall, until we submit to the transforming power of the mind of Christ (Romans 12:2) we will never get a glimpse of what a renewed mind looks like; of what being an image bearer means. I do not know much, but this much I know, only Christ can stop this intellectual and moral rot; the death, disorder, and destruction that accompanies certain ideologies that are, at bottom, a subset of our default setting: “Did God say?”